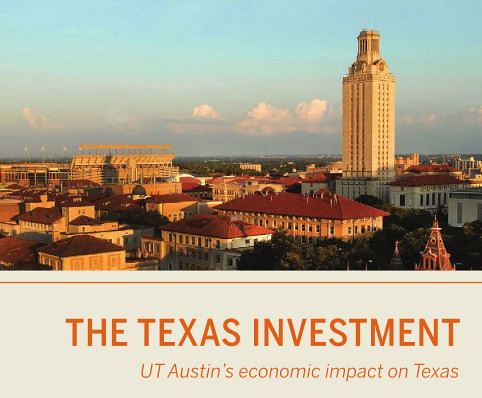 I want to share with you the results of a recently completed study that examined UT Austin’s impact on the economy of the state. The study, conducted by the firm Economic Modeling Specialists International, found that in fiscal year 2013, human capital creation, start-up and spin-off companies, operations spending, and payroll at UT Austin, together with the spending of our students and visitors, generated $8.8 billion in added income to the Texas economy.

This constitutes a 15-to-1 return on investment by the state, and is the equivalent in economic activity of creating 133,000 jobs every year.

Perhaps the most striking number in the report is the long-term economic impact. UT’s enrolled students in 2013 (the year studied) will generate an estimated $23.5 billion for the state’s economy over the course of their careers. And Texas communities will realize $2.8 billion in savings related to reduced crime, lower unemployment, and increased health and well being across the state due to benefits associated with UT Austin.

We have known for years that a UT degree is a good value, but it’s still nice to get outside confirmation.

According to a survey just published by SmartMoney Magazine, UT Austin is the second-best value in the United States. Working with PayScale, a compensation data company that maintains salary profiles of 29 million workers, the magazine developed a “Payback Score” that compares what graduates paid in tuition with their salaries. If you paid $100,000 to attend college and are now earning $150,000 a year, your score would be 150, so the higher the score the better. Georgia Tech scored the highest with 221, and UT placed with 194.

The survey found that in general public universities yielded a higher return on investment: “If our payback survey were a football game, the public schools would be spiking the ball in the end zone and kissing the mascots.”

The report goes on to say …

“Paul Ott, the Dallas father who counseled his son to go to a public college …, says they are anticipating getting an additional $2,000 or more in state scholarships from The University of Texas. At a recent freshman orientation in Austin, Ott says, another dad shared how Texas helped his son land a well-paying job in computer science at a Houston oil services firm after a summer internship. ‘The fellow said his son is making more money straight out of college than he did after 30 years,’ Ott recalls. Both the elder and younger Ott say they’d be more than happy with a graduation present like that.”

A college degree is about a lot more than a financial return, but a good one certainly doesn’t hurt.