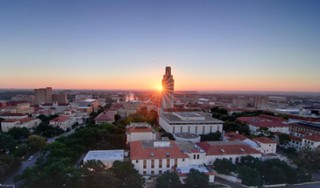 Thursday night, I had the privilege of saying “thank you” on behalf of the whole University family to some of our top faculty and staff for the work that they do every day.

Two faculty members received the Civitatis Award, given each year to reward service to the University above and beyond the regular expectations of teaching, research, and writing:

The Arno Nowotny Medal, which goes each year to a staff member of the Division of Student Affairs who follows the late Dean Nowotny’s example, was awarded to:

The President’s Associates Teaching Excellence Award went to these eight outstanding professors who exemplify the University’s commitment to excellence in undergraduate education:

We should all take great pride in the quality of faculty and staff these honorees represent.

Tonight, I have the pleasure of awarding the University’s highest honors, starting with the Presidential Citation, which will go to four vital members of The University of Texas family. This year’s recipients are:

Other honorees tonight will include recipients of the President’s Associates Teaching Excellence Award, which recognizes excellence in undergraduate teaching:

The Arno Nowotny Medal, which is awarded to staff members of the Division of Student Affairs, will go to David H. Stones, a former associate registrar and database coordinator who was instrumental in modernizing our registration process among many other accomplishments.

The Civitatis Award, presented to a faculty member who has shown exemplary campus citizenship throughout a career of service at UT, will go to Sue A. Greninger, an associate professor in the Department of Human Development and Family Science who has served for nine consecutive years as secretary of the General Faculty and the Faculty Council.

I’m so proud of all of this year’s recipients. The Tower will glow orange tonight in their honor.

I’d like to share with you the winners of this year’s President’s Associates Teaching Excellence Award. This $5,000 award recognizes great teaching of undergraduates in the core curriculum. Winners must also have been involved in curriculum reform and educational innovation. This year’s winners are:

The recipients will be honored with a banquet in the spring. Congratulations to all of this year’s winners. You make the University a better place to teach and to learn.