Last week, four professors from UT’s Cockrell School of Engineering traveled to Washington, D.C., for their induction into the National Academy of Engineering. UT Austin had the most new members of any university this year. The academy inducted 67 new members and 11 foreign associates. I’m especially proud that among them is our executive vice president and provost, Greg Fenves. They are:

Provost Fenves and Professors Edgar, Patt, and Schutz make us all proud. 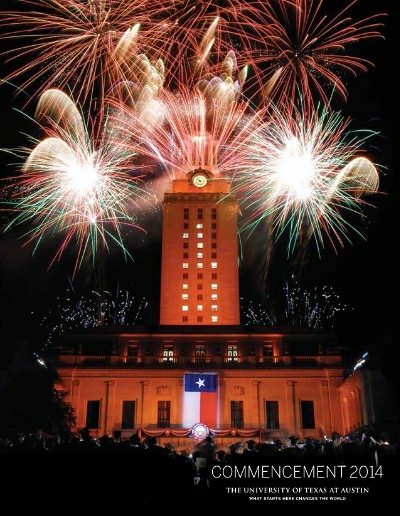 As we reach the end of the 2013-14 school year, I’d like to share some good news. This weekend UT celebrates its 131st spring commencement. More than 8,686 Longhorn students are about to become graduates of The University of Texas at Austin. Of those, 5,832 will be getting their bachelor’s degrees, 1,900 their master’s degrees, and 954 their doctoral degrees. Among those graduating with bachelor’s degrees, our three most popular majors this year, in order, are psychology, economics, and finance. I’m proud of all of our new UT graduates, and I welcome their families and friends to our campus on this joyful weekend.

This spring, we have lit the Tower orange for a number of scholarly achievements. Four of our engineering faculty members were inducted into the National Academy of Engineering, the most of any university: Thomas Edgar, Yale Patt, Bob Schutz, and our provost, Greg Fenves. We also honored mathematics professor Luis Caffarelli, winner of the Leroy P. Steele Prize for Seminal Contribution to Research, and chemistry and chemical engineering professor Grant Willson, who won the Japan Prize for his development of a process now used to manufacture nearly all microprocessors and memory chips. And, as I mentioned last month, we broke ground on three buildings for our new Dell Medical School.

The Campaign for Texas continues to break records for philanthropy as we rapidly approach our August 31 deadline to bring the eight-year, $3 billion effort to a successful close. As of today, we have raised $2,855,986,626. That leaves $144,013,374 left to raise in 110 days. That is a lot, but I know that if we pull together, we can make history. Join us!

Kevin’s hard-won achievements are emblematic of what Longhorns do every day across society. From teaching to nursing, accounting to the arts, engineering to journalism, and in so much else, what starts here changes the world.

Here’s to another great school year. 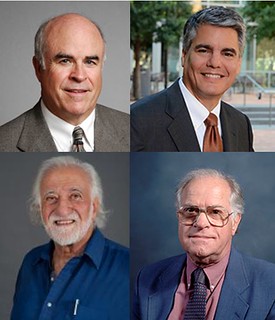 The National Academy of Engineering announced Thursday that four professors from UT’s Cockrell School of Engineering have been elected to its ranks. The academy inducted 67 new members and 11 foreign associates; UT Austin had the most new members of any university this year. I’m especially proud that the inductees include our executive vice president and provost, Greg Fenves. The inductees are:

Provost Fenves and Professors Edgar, Patt, and Schutz are exactly the type of UT Austin faculty who change the world every day. Their research and their distinguished careers as teachers have shaped generations of engineering students and enhanced our understanding of the world. 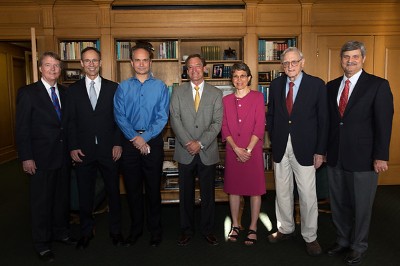 Last night I hosted a reception honoring five UT faculty members inducted into three national academies. We should all take great pride in these inductions, as few honors embody our identity as a top research university as these do. The Tower was lighted orange in their honor.

Joseph J. Beaman Jr., the Earnest F. Gloyna Regents Chair in Engineering in the Department of Mechanical Engineering, was elected for innovation, development and commercialization of solid freeform fabrication and selective laser sintering.

Sharon L. Wood, the Robert L. Parker Sr. Centennial Professor and chair in the Department of Civil, Architectural and Environmental Engineering, was recognized for her design of reinforced concrete structures and associated seismic instrumentation for extreme loadings and environment.

Keith P. Johnston, chemical engineering professor in the Cockrell School of Engineering, has been elected to the National Academy of Engineering (NAE), one of the highest professional distinctions accorded to engineers worldwide.

John Goodenough, a mechanical engineering professor who is widely credited for the scientific discovery and development of the lithium-ion rechargeable battery, has been elected to the National Academy of Sciences.

George Georgiou, a professor whose technology developments in the engineering, medical, biochemical and cellular fields could help treat tens of thousands of patients with diseases such as cancer and osteoporosis, has been elected as a member of the Institute of Medicine (IOM).

In addition, two new alumni members of the National Academy of Engineering were inducted:

Rex Tillerson, B.S. in civil engineering ’75, was recognized for engineering leadership in the production of hydrocarbons in remote and challenging environments. Tillerson, the CEO of Exxon Mobil, has been a member of the Cockrell School’s Engineering Advisory Board for the past six years and is a member of the UT Development Board.

Gregory Deierlein, Ph.D. in civil engineering ’88, is the John A. Blume Professor in the Stanford University School of Engineering. He was recognized for the development of advanced structural analysis and design techniques and their implementation in design codes.

Congratulations to all of you, and thank you for the honor you bring to the University.