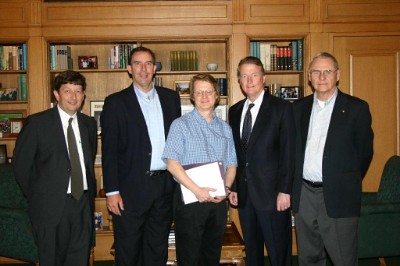 Tuesday, I had the pleasure of presenting the Piper Award to Michael Downer. Each year, the Minnie Stevens Piper Foundation selects 10 professors in Texas to receive $5,000 rewarding excellence in teaching. Professor Downer is a Distinguished Teaching Professor in our Department of Physics and a recent recipient of a Regents Outstanding Teaching Award.

Among his innovations in classroom teaching, Michael introduced “Concept Quizzes,” an interactive teaching method that encourages dialogue between lecturers and students and among students themselves in large lower-division classes. This innovation went on to be adopted by other faculty members, was computerized as part of the Painter Hall lecture room remodeling, and has become the department’s standard procedure for large introductory courses. Michael also introduced “Cir-Kits,” take-home electrical circuit kits with accompanying homework exercises for students in introductory electricity and magnetism courses.

In addition to his classroom teaching, Professor Downer has supervised and financially supported the work of over a dozen undergraduates and several dozen graduate students in his research labs, where his students investigate femtosecond laser science. Most of these students have become scientific leaders in their own right in universities, national laboratories and industries around the globe. Recently, Michael and his wife established the Jane and Michael Downer Presidential Fellowship in Laser Science in memory of one of Michael’s first students, Glenn Bryant Focht, who succumbed to cancer several years ago. This fund is now beginning to support the education of new students in laser science.

Professors like Michael Downer exemplify what a research university is all about. 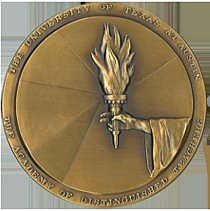 Among the many ways we reward excellent teaching on the Forty Acres none is more special to me than the induction of new members into the Academy of Distinguished Teachers. My own induction in 1997 will always be one of the highlights of my career.

Each year, deans nominate professors for membership, and a committee including members of the academy, students, and other faculty recommend a slate of honorees to the provost, who makes the final selections. Established in 1995, the academy honors members with the permanent designation of “University Distinguished Teaching Professor.”

Tonight, seven professors will join that 5 percent of tenured faculty who comprise the academy, modeling excellence and providing leadership in our continuous quest to improve undergraduate education:

With tonight’s additions, 121 faculty members have been recognized as University Distinguished Teaching Professors. I often say our faculty is the best, which makes our academy members the best of the best.

Thank you for all you do to make The University of Texas at Austin world class.