In 2012, I asked a group of 13 alumni and business leaders to examine UT’s administrative structure and operations with the goal of increasing our business productivity. They made their recommendations in January 2013. Since then, under Vice President Kevin Hegarty’s leadership, we have done an extensive study of the feasibility of those recommendations and gotten valuable input from the campus.

One major recommendation of the committee was to consolidate certain administrative functions across campus to be more efficient — a model known as “shared services.” We formed a steering committee composed of UT deans, staff, faculty, and students to examine this idea. Today, I present the Shared Services Steering Committee’s recommendations, viewable here.

The Steering Committee has proposed that over the next year shared services be piloted by select volunteer units. I am currently reviewing these recommendations.

Sharing services is not new to our campus. Pockets of shared services already exist in the College of Liberal Arts, McCombs School of Business, Information Technology Services, and the Central Business Office, which currently provides services for my office. So in addition to the pilot programs, we also will undertake a detailed study of these existing structures and how they are performing.

Change is never easy, but I believe we must share services across the campus for three reasons: to improve service, to improve career paths for our staff, and to reduce costs, allowing us to better serve our core missions of teaching and research.

I thank Vice President Hegarty and the Steering Committee for their thoughtful work. 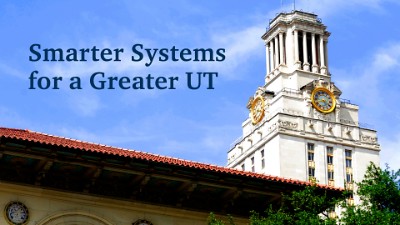 In April 2012 I appointed the Committee on Business Productivity to study UT’s business operations and to make recommendations on increasing our efficiency and effectiveness. The committee, consisting of 13 business leaders, submitted its report, “Smarter Systems for a Greater UT,” to me earlier this month. I’m very grateful to its members for their thorough and thoughtful work.

Earlier today I shared my thoughts on the report in a speech on the campus, and I want to convey a few of the highlights. The Committee studied three large areas of University operations:

Implementing these recommendations will be a thoughtful process that will happen over a period of several years. I am committed to a measured and inclusive process that will seek input from the community. Kevin Hegarty, our vice president and chief financial officer, has accepted the responsibility for driving this process forward, and I’m thankful for his leadership.

While change is always challenging, these initiatives will strengthen the University and infuse its core academic mission with new resources and energy. Ultimately, the more efficient our business systems become, the better we can serve our students and the people of Texas.

The Committee’s report and the full text of my speech are online at: http://bit.ly/smartersystems