Yesterday, the University said thank you to everyone who helped support this great institution through their generous donations. As I reflect on the success of the Campaign for Texas and the $3.12 billion it raised, I think about the nearly 272,000 students, alumni, and friends who had the faith in this university’s vision to make a gift. I want to share my gratitude with each and every one of you. Thank you.

Please visit this website that tells the story of the campaign and includes a special thank you video you won’t want to miss. 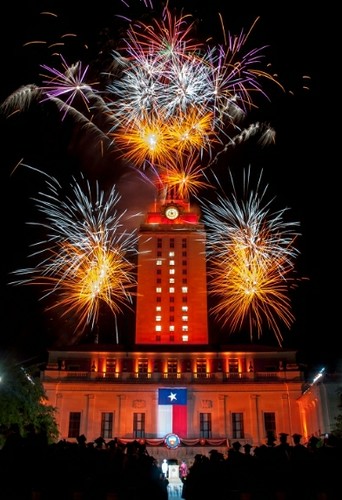 On October 17, 2008, I stood before a meeting of UT Austin’s Development Board and made an audacious proposal, a proposal to raise $3 billion through philanthropy in order to achieve the vision of excellence established by the Commission of 125. “That’s the cost of recruiting exceptional people and building excellence in our most strategic programs,” I said. “If we do this, we can become the great public research university of the 21st century.”

With that, we embarked on what we now believe is the largest fundraising campaign of any institution in the history of Texas.

It is thrilling to announce that we have successfully completed this transformative project. The campaign included gifts made during a two-year “silent” period that began in 2006, and in the eight subsequent years, we raised more than $3.1 billion. In the past year alone, we raised more than $856 million, setting a record for Texas higher education.

It often is said, if you want to know what a person believes in, look at his or her checkbook. You believed in UT. And you voted with your checkbook to pursue a vision of true excellence, a vision of UT Austin as America’s best.

My heart is filled with thanks for every member of the Longhorn family — individuals, foundations, associations, and corporations — who helped us. Especially, I thank three devoted alumni — Kenny Jastrow, who chaired the campaign, and Charles Tate and Libba Massey, who served as its co-vice-chairs. These three and thousands of others made the campaign a success.

Already, giving during this campaign has changed the face of our campus, with our new Liberal Arts Building and its home for ROTC, Gates Computer Science Complex, Dell Computer Science Hall, Belo Center for New Media, and Rowling Hall for graduate business education, among others. And the campaign has changed what we call our constituent parts: “Dell” is how we refer to our new medical school, “Moody” to our College of Communication, and “Butler” to our School of Music. The campaign established 830 new student scholarship and support endowments. 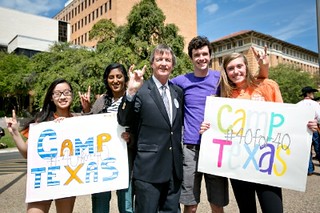 Visiting with Camp Texas leaders helping with our 40-hour fundraiser

Last week, we set a goal of raising $40,000 in 40 hours for UT Austin. I’m happy to report that at the end of 40 hours, students and alumni had joined together to more than triple our goal, raising $128,516. Supported by social media and other channels, this was the most successful web-based fundraiser we have ever had.

On Friday, during the 40-hour campaign, I visited Gregory Gym to check the progress. There I met dozens of students from groups like Texas Blazers, Umoja, and Camp Texas who were raising money for UT and promoting their groups.

I’m so proud of our students and all of our alumni and friends who participated in this first-of-its-kind fundraiser. If you missed the event and would still like to give please visit this page. It’s a great time to be part of the UT Austin family.

Yesterday, on Texas Independence Day, we crossed another milestone in the Campaign for Texas, when our total giving surpassed $2.75 billion. More than 257,000 alumni, friends, foundations and corporations have given during this capital campaign. If you are among them, thank you! If you haven’t given yet, you can still help us make history and achieve our goal of $3 billion by August 31.

Your contributions are already hard at work. One exciting example is UT Austin’s new Dell Medical School. Because of your generosity, we are breaking ground for the medical school on April 21. And your donations help in thousands of other ways, such as scholarships for deserving students, faculty chairs in critical areas of study, and support of crucial programs across the University that will shape the future of our state and world.

Every gift, large or small, counts. Estate gifts (and letting us know about them) are especially important. And it just might be yours that propels UT across the finish line. Please give today. http://giving.utexas.edu/ 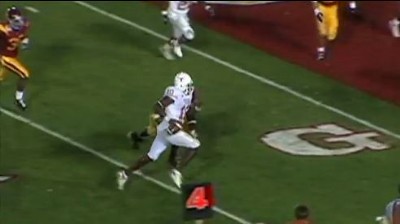 It’s time for some straight talk. Today, we open the final chapter of this great undertaking we call the Campaign for Texas. We have one year left in an eight-year fundraising campaign, and we have reached 75 percent of our goal. It doesn’t take a UT mathematician to figure out that it’s crunch time.

Seven years ago, when my team and I set the goal at $3 billion, we knew we were taking a risk. But I also knew something else — that we’re Longhorns, and that Longhorns are a different breed. I knew that the bond between UT alumni and their alma mater is powerful — that alumni and friends have risen to meet one audacious challenge after another and have done whatever it took to keep this a university of the first class. I believed then — and I absolutely believe now — that we can do this, and that we will.

I can say it no more plainly: UT needs you, and it needs you now.

If you have given before, thank you, and please give again. If you haven’t given yet, join the team and be a part of this historic effort. Please watch this short video (that is sure to bring back a happy memory), then go to http://giving.utexas.edu/homestretch/ and make a gift today.

I know we can do this. Let’s make history, together. 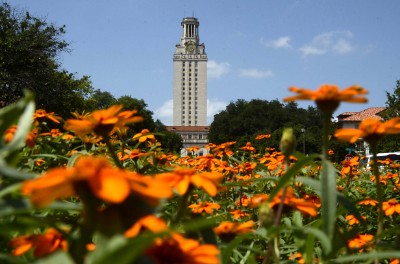 The University of Texas at Austin has raised more than $300 million from donors during the current fiscal year, which does not end until Aug. 31. If it continues at the current pace, UT Austin will have its best fundraising year in history, surpassing the $366 million it raised in 2008.

I’m so grateful to our alumni and friends for the strategic investments they are making in UT Austin, and I’m very proud of the fundraising team we have in place that is succeeding so dramatically during these still-challenging economic times. I know we can reach our goal, and when we do, those funds will fuel UT’s ascent to the top tier of global public higher education.

Highlights of this year’s efforts include:

Major gifts and pledges contributing to this year’s success have included:

To date, UT Austin has raised more than $2.1 billion for the campaign. Before the “Campaign for Texas,” the most successful capital campaign in the state was UT Austin’s “We’re Texas” campaign of the late 1990s, which raised $1.6 billion.

Thank you, and Hook ’em Horns!