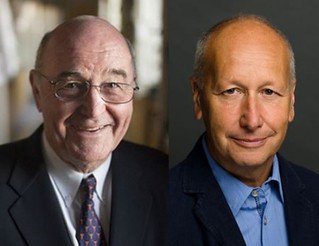 Last night, the Tower glowed orange in honor of Dr. Grant Willson, professor of chemistry and chemical engineering and winner of the prestigious Japan Prize. He won the prize for his development of a process now used to manufacture nearly all of the microprocessors and memory chips in the world. Grant joined the faculties of the Departments of Chemical Engineering and Chemistry at UT Austin in 1993. His previous honors include the National Medal of Technology and Innovation.

Tonight, we light the Tower again, this time for Dr. Luis Caffarelli, professor of mathematics and winner of the 2014 American Mathematical Society Leroy P. Steele Prize for Seminal Contribution to Research. Caffarelli, a native Argentinian, joined our faculty in 1997. His previous prizes include the Wolf Prize, the Bôcher Memorial Prize, and the Rolf Schock Prize. This is his second Steele Prize; in 2009 he won the Leroy P. Steele Prize for Lifetime Achievement.

I know you share my immense pride in Grant, Luis, and our entire faculty, both for the world-class education they give our students and the honor they bring to The University of Texas through achievements like these.

Recently, three of our faculty members have been honored with top prizes in science.

C. Grant Willson, professor of chemistry and chemical engineering, has won the Japan Prize, an international award similar to the Nobel Prize, for his development of a process that is now used to manufacture nearly all microprocessors and memory chips. He will share the 50 million yen prize (approximately $560,000) with his colleague Jean M.J. Fréchet. The Japan Prize Presentation Ceremony and Banquet, with the emperor of Japan in attendance, will take place in April.

Also this month, the White House announced that UT’s Allen Bard, chemistry professor and director of the Center for Electrochemistry, and engineering professor John Goodenough will receive the 2012 National Medal of Science. The honor is administered by the National Science Foundation and recognizes American scientists, engineers, and inventors. Bard and Goodenough will join 10 other scientists in a ceremony later this year. Only UT and Stanford contributed more than one faculty member to this year’s group of honorees.

In his 55 years teaching at UT Dr. Bard has trained generations of scientists and has pioneered scanning electron microscopy. Dr. Goodenough is widely credited with the development of the lithium-ion battery, critical to so many of the electronics embedded in our way of life.

Willson, Bard, and Goodenough are giants in their respective fields and have brought quality and prestige to a UT education. I’ve said many times that it’s our faculty that sets us apart, and I couldn’t be prouder of these three examples.