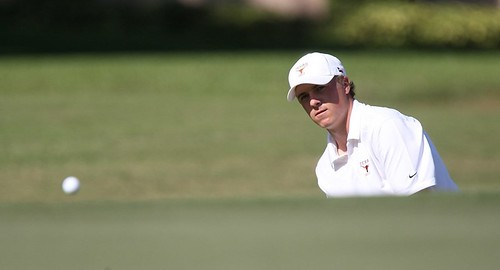 Last night, we lit the Tower orange for Texas Ex Jordan Spieth, who won the Masters Tournament at Augusta National Golf Club, finishing 18-under-par. Jordan helped lead the Longhorns to the 2012 National Championship. At 21, he became the youngest to win the Masters since Tiger Woods in 1997.

It was Jordan’s third win on the PGA Tour and fifth win worldwide. He is now ranked No. 2 in the world. Jordan’s win was the first by a former Texas player in a major championship since Justin Leonard won the British Open in 1997. He is the second Texas Ex to win the Masters, joining Ben Crenshaw, who won in 1984 and 1995. And Jordan is now the fifth former Texas player to win a major championship, joining Crenshaw, Tom Kite, Justin Leonard, and Mark Brooks. 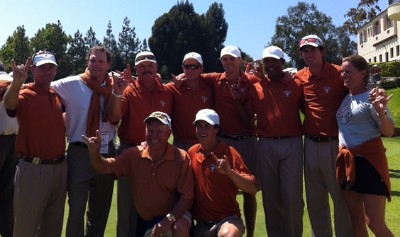 As a golfer, I’m all too familiar with what 30 feet of grass between the ball and the hole looks like. It’s a long way. But it didn’t spook geography senior Dylan Frittelli Sunday at Riviera Country Club in Pacific Palisades, Calif. When Dylan sank that putt to beat Alabama in the NCAA tournament, he and his four teammates in the tournament gave UT its first national championship in golf since Ben Crenshaw, Tom Kite, and company brought home back-to-back wins in 1971 and 1972.

The Longhorns had been ranked No. 1 since November, and Sunday night the Tower glowed orange to honor our newest national champions.

Congratulations to Coach John Fields and staff, and all 13 men on the team. You make us proud.