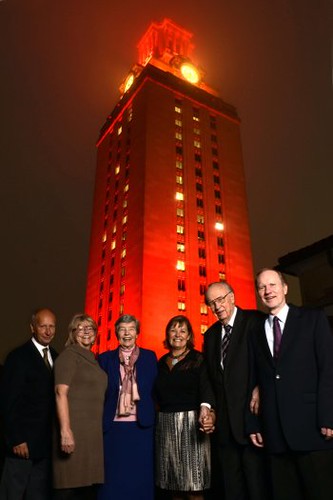 From left, professors Caffarelli, Babuska, and Engquist are joined by their wives in front of the Tower lit in their honor. Photo by Marsha Miller

Einstein said, “Pure mathematics is, in its way, the poetry of logical ideas.”

If so, then last Tuesday evening we held a reception and lit the Tower orange to honor three of UT’s greatest poets, all of whom recently have won extremely prestigious awards in mathematics.

All three are also affiliated with UT’s Institute for Computational Engineering and Sciences.

Adding to the stature of mathematics at UT, the department is in the rare situation of now hosting four concurrent National Science Foundation postdoctoral research fellows – truly a hallmark of an elite group. I congratulate all these winners and department chair Alan Reid for his leadership of such a groundbreaking program.