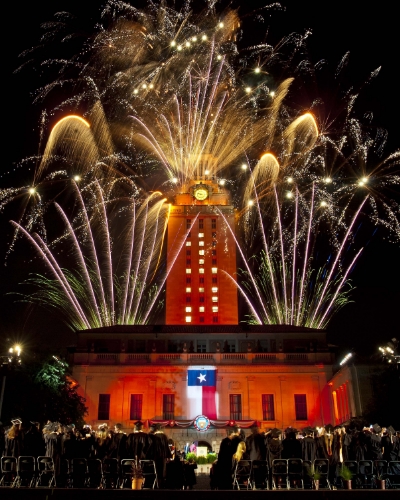 On Saturday night, nearly 8,000 Longhorns graduated from The University of Texas and joined the worldwide family of Texas Exes. It is without a doubt the highlight of the year for anyone involved in the daily life of the University, and we treat it as such — with a symphony and chorale, inspirational speakers, and fireworks.

I want to congratulate every UT graduate and share with you three student stories I highlighted Saturday night:

Nathalie Kalombo graduated with degrees in government and political communication, and a minor in Spanish. She was born in the Democratic Republic of Congo, and her family overcame great adversity and made tremendous sacrifices on their way to life in America. Her experience with an oppressive state fueled Nathalie’s passion for democracy, and she hopes to one day be a communication director for a presidential campaign. Having just completed UT’s Archer Fellowship in Washington, she is well on her way. Whether she’s volunteering in student government or in her community, she’s inspired us with her passion for what we too often take for granted — human rights and true democracy.

Cooper Neely graduated with a degree in dance. But that’s not what he expected. Cooper grew up in the North Texas town of Throckmorton, population 900, and came to UT to get an anthropology degree. He’d always enjoyed dancing, but his only teacher had been YouTube. Then he enrolled in a theater class, and his professor and fellow students noticed his extraordinary talent right away. He switched his major to dance and soon became one of the department’s leading performers. Cooper is now off to study at the prestigious San Francisco Conservatory of Dance. It might never have happened if that small-town kid hadn’t come to UT and been open to new possibilities.

Luciano Martinez III graduated with a degree in mathematics. As a freshman from the Rio Grande Valley, Luciano was a walk-on for the Longhorn football scout team, and although he only played one down in his time on the team, he always took it on himself to pump up the crowd from the sidelines. Also as a freshman, he joined UTeach, the nationally recognized math and science teacher-training program. This year, while finishing his degree, Luciano taught geometry four hours a day, five days a week to sophomores at McCallum High School. He’s now considering several teaching positions, but wherever he lands after graduation, he knows what he wants to do. “I want to teach kids math,” he says, “and coach my defensive line.”

These students and so many more remind me of why I chose to make education my life’s work.

Finally, I’d like to thank Secretary Robert Gates for his inspiring remarks and everyone who works so hard each May to make commencement a memory to last a lifetime.

I’m happy to announce that Ward Farnsworth will be the new dean of the UT Law School starting June 1. He comes to us from Wesleyan University in 1989 and a law degree from the...
Continue Reading
NEXT POST»

On Thursday night, I had the pleasure of attending a function in New York City for Leslie Stahl from 60 Minutes. Posse is a wonderful and innovative organization. It identifies and trains urban high school...
Continue Reading